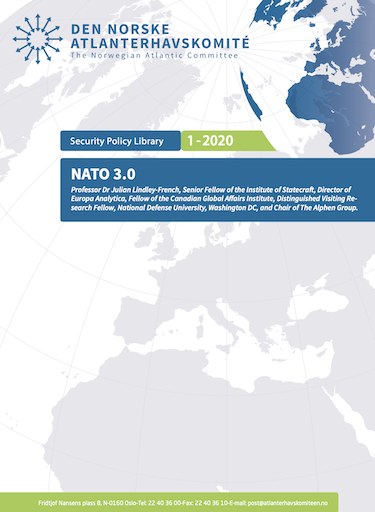 Much of the debate over the future of the Alliance is now focussed
on a vision for NATO in 2030 – NATO 3.0. This is the focus of the work
of the Secretary-General’s NATO Reflection Group. It is necessary
because there is no room for complacency given the scale and pace
of change that will occur over the next decade or so. In September
2020 the Committee for Specialization celebrated seventy years of
advancement. Your correspondent had the honour of addressing
that august meeting at NATO HQ in Brussels. Central to my comments
was a striking assertion: imagine the past seventy years of military
technological advancement and more being crammed into a decade.
Consequently, the very idea of defence and deterrence is about to
be revolutionised. With the accelerating entry into the battlespace
of emerging and disruptive technologies (E&DT) ranging from artificial intelligence, quantum computing, big data, machine-learning,
hypersonic adaptive missile systems, and tailored Nano and bio
technologies the speed of warfare and thus of command will accelerate exponentially. Such technological changes to the character
of warfare will work in conjunction with so-called 5D continuous
and complex strategic coercion, grey zone warfare through applied
disinformation, deception, disruption, destabilisation and implied
destruction.

The Security Policy Library, with the title "NATO 3.0", can be read and downloaded HERE.

Professor Dr Julian Lindley-French is a Senior Fellow of the Institute of Statecraft, Director of Europa Analytica, Fellow of the Canadian Global Affairs Institute, Distinguished Visiting Research Fellow at the National Defense University, Washington DC, and Chair of The Alphen Group.