The Norwegian Army together with the Norwegian Atlantic Committee welcome you to follow the live stream from Army Summit, Tuesday 27th of September 2022.

Chief of the Norwegian Army, Major General Lars S. Lervik, will together with chiefs of the armies from Denmark, Finland and Sweden share their reflections, as well as researchers and politicians from the Nordic countries.

– We are living in historical times. The Finnish and Swedish applications for membership in NATO present many opportunities to strength the Nordic cooperation. However, this historic shift comes as a result of Russia’s invasion of Ukraine and this war presents the gravest risk to international peace and security in decades.

I therefore especially look forward to discussing our common challenges with the Chiefs of the armies from Denmark, Finland and Sweden at this year’s Army Summit. I am also looking forward to the insight we will get from the panel discussions with Nordic researchers and politicians.

– Swedish and Finish NATO membership is a geopolitical gamechanger! It will strengthen NATO’s deterrence and defense by adding democratic, wealthy, and relatively strong military countries, with significant capabilities, in a strategically vital region of the Alliance.

This year’s Army Summit will discuss the importance of deepening Nordic cooperation across sectors and underscore the importance of multilateral collaboration to defend the Nordic-Baltic regions numerous “small states” against future aggression. I look forward welcoming experts from across the northern hemisphere, to hear their reflections on this major strategic and geopolitical shift, as well as hearing the military perspectives presented at this year’s timely Summit.

Since the first Army Summit in 2009, the goal has been the sharing of knowledge and ideas between military professionals, policy-makers, researchers, and the public. This year’s Army Summit will have three sessions with panel discussions and Q&A, one session from the Nordic land power perspective, one session from a Nordic research perspective, and one session from a Nordic political perspective. The Norwegian Army Value Award (RAM-prisen) is also an important part of the conference, highlighting soldiers who have shown extraordinary responsibility, respect and courage.

Information about the program and the speakers is available on the Army Summit's official website. 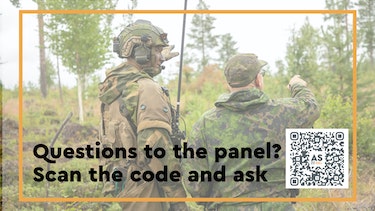